Planning a Bridge of Size?

Maybe we’re reading things wrong but things on the stadium front may just be ready to start moving forwards again. The minutes from the CPO Board on 1st November mention that:

“Further contact between CPO and the representatives involved in the consultation has been made. There is no further information available currently, although it was reported that further announcements will be made shortly.”

This tallies with the previous statement of the CPO Board in which it was suggested that the consultants would return in the ‘autumn’ with ‘more concrete proposals based on the feedback received from this initial consultation’.
At this point it might be worth noting that we are slightly surprised that more hasn’t leaked out regarding the specifics of the consultation beyond what the CPO Board have already stated. Does this suggest that everyone involved has been super tight-lipped so far? Or perhaps that the consultation has been highly targeted rather than truly comprehensive? Probably the latter, we think, but that need not be a problem providing the right people are being consulted and the right questions are being asked. The previous statement from the CPO Board gives us confidence that this is the case.
From the club’s point of view, a few things have emerged recently which seems to clarify their position on the stadium issue. Before he left the club Ron Gourlay gave an interview for FCBusiness in which he outlined the reasons why the club needed a larger stadium. He said:
“We have to look at our fan base in five years’ time. Internationally we have one of the youngest fan bases. At Stamford Bridge we have one of the oldest. The problem is that we have 30,000 people coming into the stadium every week who are season ticket holders. In a 41,000 stadium you give 3,000 to the visitors, a family area of 3,000, so there are just 5,000 seats left. We have approximately 100,000 paying Chelsea club members and just 5,000 seats to offer them. We have a very young fan base who can’t get into the stadium and they are the future of this football club. We have to find a way to get them all in.”
Gourlay also managed to squeeze in an interview with Mihir Bose for Insideworldfootball.com. He stated:
“I’ve said it until I’m blue in the face, we’d love to stay here [i.e. Stamford Bridge]. This is the home, this is where we want to be, and this is the location that every other club would want to have.”
As for expanding Stamford Bridge he said, “We continue to look at it. We have a process in place at the moment where Mr Abramovich has put us into consultation with the shareholders, the community, just to gauge the feeling. If there was a regeneration of the area, what would they like to see? I’m not saying that we’re going to do it because we don’t know if that’s possible. The pitch owners still have a say. The pitch owners’ argument is they want to protect Stamford Bridge. So if we decide we stay at Stamford Bridge and whether it’s moving up to 41,000 or 60,000 then we’ll have the support of the pitch owners. Hey look, these guys invested in the club long before Ron Gourlay arrived [he arrived in 2004] so I’ve got to respect that and I do respect that.”
As to whether it is feasible Gourlay’s position is: “I think technically it’s a difficult one. I think you’ve got to come up with a plan that unlocks things technically and then we have to have the buy-in from the local community, because we’re part of the community. People forget that. The local community has thrived through this football club being here as well. It’s got to be right for everybody. If it’s right for everybody and we can give back into the community, we will get there.”
Now, in the past week, the club appear to have leaked further information about their plans by means of a private briefing with various members of the press just before the club’s latest accounts were released. As usual, it is fairly simple to spot that a flurry of press coverage is as a result of a club briefing rather than the usual press twaddle because each of the resulting stories take the same basic line and they all repeat key soundbites. That was certainly the case this time. So what can we confirm from the briefing?

So what is the club telling us? Quite a lot as it happens.

Firstly, it now seems quite clear to us that the club is determined to redevelop Stamford Bridge - assuming this is technically feasible. Regular readers will know that CFCtruth has written extensively about the possibility of the club moving to a new location and we know these were live options at various points. Now, however, based on both the briefing and a lack of movement elsewhere (Earls Court in particular) these possibilities all seem to be firmly closed. The club has apparently moved on and perhaps the time has come for this blog to move on too (that is, of course, unless all the words coming from the club are an elaborate feint – but we are doing our best to rein in our innate scepticism).

Now we know some people view CFCtruth as a pro-move blog but this has always been incorrect. What we are is pro-club and pro-ambition but also very much anti- the misinformation that has led to the club missing out on certain superb opportunities. We have also tried to ensure that LBHF's activities and weasel words were laid out for all to see (particularly with Earl's Court) so that fans were able to apply pressure to the council if they chose to. But if the club can somehow make a redevelopment at the Bridge happen, with both the help and support of the new administration and the residents (still highly controversial) then no one will be happier than us. Chelsea’s location is unique in world football and the club would be mad to throw that away for a second-best option if the best possible option is achievable.

As noted above, we consider the ‘£20,000 per seat’ figure, the consequent £364m project cost and the one or two year construction period cited above to be significant. Looking back at the Future of Stamford Bridge report from 2012, it is stated that a 60,000 new build stadium would cost over £600m and would take three years to construct. So, based on that it seems clear that what is being considered by the club in these plans is not a new build on the Stamford Bridge site.

Another section of the Future of Stamford Bridge report also caught our eye. 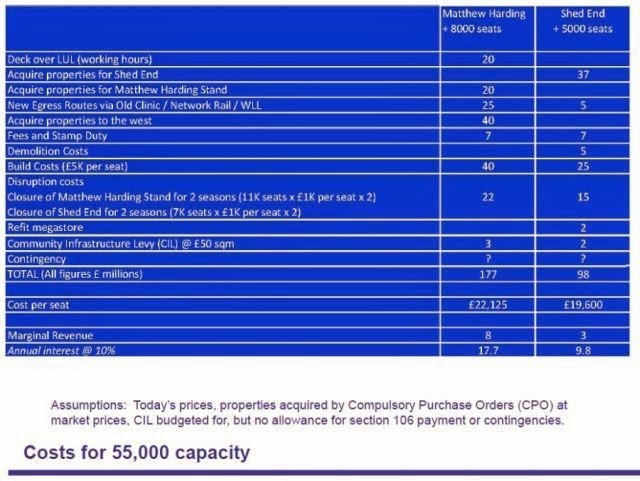 The proposed costs for the redevelopment of the Matthew Harding and the Shed to increase the overall capacity of Stamford Bridge to 55,000 is estimated in the report at £275m and notably the cited cost per seat is around £20,000. Taking into account inflation since 2012 could the suggested £364m project cost be based on this template? Perhaps the additional cost would allow the project to squeeze a further 5,000 seats in somewhere to bring Stamford Bridge up to the magical 60,000 capacity which the briefing suggests the club remains firmly wedded to.

That said, we have heard vague rumours from elsewhere that the project might involve keeping the West Stand as it is and rebuilding each of the other three stands – the new East Stand being built over a decked over railway line. Could the suggested £364m project cost accommodate a new East Stand too? That is debatable but it would make sense financially for the club as even if a new East Stand would only add 2,000-2,500 to overall capacity (as the FoSB report suggests) there is huge potential for improved corporate facilities in the stand.

Whatever is eventually proposed, it seems certain that the club would have to acquire surrounding properties in order to accommodate, if not the stands themselves, but the necessary exit routes. This is bound to include a new exit north of Stamford Bridge along the route of the railway line which will require decking over the tracks and which will include a new “green north-south cycle route past the stadium”. And despite the initial club statement suggesting any development would be ‘within the existing historic site boundaries’ it may well also need to incorporate the Sir Oswald Stoll mansions too which would require a uniquely sensitive approach in order to succeed.

So what’s going to happen next? Well, based on the CPO Board statement, it seems highly likely that the club will make one or more new announcements about the stadium relatively soon. However, we shouldn’t expect a full planning application just yet. Instead the club are much more likely to first announce their firm intention to redevelop Stamford Bridge (something along the lines of this statement by Tottenham) after which they will move into an intense period of pre-application consultation. This means formal discussions with the council and the LBHF planning department would begin (though we are sure that informal talks have already taken place) along with discussions with various statutory authorities and stakeholders such as the Mayor of London, English Heritage and Transport for London.

Additionally, and most exciting for us supporters, this period will almost certainly include extensive public consultations incorporating some kind of public exhibition of the club’s stadium redevelopment plans. No doubt we will also see the proposals resulting from the current consultation about the public space in Fulham Road and around the stadium. The actual planning application itself, assuming it will follow, may not happen for another year in order to give the club time to complete the various consultations and to weigh up the results.

Because now the club seem to have firmly tied their colours to the Stamford Bridge redevelopment mast, nothing about this project will happen quickly. There remain numerous obstacles in the way of a Stamford Bridge redevelopment and the long hard road ahead will prove extremely challenging and arduous. But the prize at the end of the road – perhaps as long as a decade in the future – promises to be one which every Chelsea fan can celebrate.
Posted by CFCtruth at 08:14